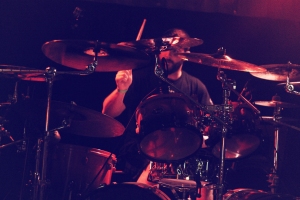 With Adam’s busy schedule it took him a while to get back to us with his answers for our Misery Index interview. No worries though we got them and even added a few Pig Destroyer questions in there for him as well. . Hope you enjoy the read!
Damnation Mag: How do you differentiate your drumming styles between bands? What makes you say ‘that would be awesome for Pig Destroyer or Misery Index, ect.’?

Adam Jarvis: It all depends on the riff and flow of the song. Also it’s all about the mood you have at the time, or what you’ve been listening to. I write all my drum parts for Misery Index, and it’s a very, very involved process. Some songs I sit down with and work on for 40+ hours just to get it right.
As for Pig Destroyer, Scott Hull is a master at everything, so he writes a lot of the rough draft drum parts himself and proposes the song to me in a completed version and I take it and do my own thing with it.

DM: The last Misery Index record (Heirs to Thievery) was recorded in 4 weeks. I understand there was more time involved in the writing process this time around. What kind of recording procedures take place when writing an album be it for Misery Index, Pig Destroyer, Fulgora, etc.? Do you record drums before or after other instruments are laid out?

AJ: Well the preproduction and practice is the most important part of writing an album. This time around with the new MI record we were all spread out and doing our homework on the songs and working in them in different states and countries. When Mark and Jason would come in town they would lay down a lot of their ideas and we would go over the material before they rolled out of Maryland. Then it was time to add my ideas and send them back and forth to get approved by everyone. Darin Morris and I would sit for days in his studio working on these songs and really making them as heavy and fluent sounding as possible, and I feel it’s our best effort yet! Definitely the most producing I’ve done on an album to date. Some songs were structured in its entirety by myself. It’s a lot of fun creating music you want to hear. The trick is, to make other people like it as well!!!

DM: I personally have yet to listen to the Killing Gods (now I have many times over), though I understand the production quality is much higher than that of previous albums. What processes did you take to make this different (producer, equipment, recording time, etc.)? And do you feel like having a finer production quality or more of a Raw sounding record is better, or does it that more of a decision you make on a record to record basis?

AJ: It was definitely a conscious effort before stepping into the studio. The rest of the dudes and myself are all into the old school Scott burns or Morrissound recordings. We wanted a record that has that old school sound but modernized. I’m personally not a fan of the obvious over edited and super processed records that are the standard now a days. Lots of engineers have their go to way of recording and apply it across the board, but they forget to make the band actually sound like the band on their own record. There is no identity anymore. I decided to record the drums with Scott Hull for many reasons, one being, I’m good friends with him and in a band with him, and there happens to be a badass studio in his basement where PxDx jams. Also this decision was a no brainer cause of the way my debut album with PD turned out “Book Burner”.  That is the one record I listen to and love the fact that it really sounds like me playing!

DM: Crowd funding seems to be making a HUGE impact in the music industry today, Devin Townsend reached 550% of his goal, Protest the Hero crushed it as well. Do you think this is a good direction for musicians? Would Misery Index/Pig Destroyer consider crowd funding an album or tour? Is it just a phase that will pass or do you think it will continue to grow and help the music industry in the “steady decline/lull” that it’s in right now?

AJ: It‘s hard times out there!!!!
I’m not totally against it. If it’s getting used for the purpose stated, then so be it. If it’s just a quick money grab then that’s lame. If it came down to a desperate situation and a last resort then I would kinda think about it maybe….

DM: While Pig Destroyer doesn’t tour very often, Misery Index seems to do just the opposite, though it almost seems as if you (Misery Index) are bigger in the European market than you are in the American market. . . Have you noticed that to be true and if so what would cause something like that? And as for PD, I never got to ask if there was any reasoning behind the whole not touring/not touring often? Was this something to keep the hype up or is it more because you all have other things going on in your lives that there really isn’t time for full on tours?

AJ: Misery index released their first full length before I was in the band on the label Nuclear Blast which is a German label. The label really pumped the band up in Europe and helped the growth early on. We’ve continued to venture all across the continent since. There is a dedicated fan base for metal over there, more so in the states. Just look at how many crazy summer festivals there are in Germany alone!
PD has toured, not on the scale of Misery Index though. Mostly cause of jobs and family obligations. It’s hard to get time off work and justify paying bills when you go on the road. It’s VERY expensive to tour, especially these days. Shit isn’t getting any cheaper…

DM: Growing up locally (St Louis area) you have probably seen the ups and downs of the music scene here. Are there any words of advice you would like to give for any of the up and coming bands out of the area? What steps did you take to get where you are now, especially coming from a smaller market city like St. Louis and ending up in two hard hitters in the metal community?

AJ: Play out side of your home base. All Will Fall didn’t play to many out-of-town shows, but when we did, we always got more respect then we did in our area. I mean, outside of our own friends and family. Also then, it was a lot harder than it is now. When I found out Misery Index was looking for a drummer, I overnighted a VHS to Kevin Talley and I got a phone call the next morning!! It was nuts!!! With all the ways to promote bandsand get your stuff out there, you almost have to separate yourself from the pack a bit. Don’t try to sound like every other “chugga chugga Bree Bree” band out there. Basically don’t suck. Haha, just joking. Work hard and it’ll pay off. That’s what I did.

DM: And the last one is just an open-ended thing, If you could build your own tour for either band, who would you choose to play with? The bands can be current touring acts or acts of the past. But it seems like the bands rarely get the choice of who they tour with, so I am just curious as to which bands you would choose.

AJ: I’dlike to play with Deathspell Omega. Not tour. One show. Even if they played one song. A tour with Magrudergrind, Monstrosity, and Fionna Apple would be pretty sick though!!

We would like to thank Adam Jarvis and Mark Kloeppel for taking time out of their busy schedules and answer these few questions for us. Hopefully you all enjoy the read as there will be plenty more where this came from!